Home // dance // How Many Lindy Hoppers are There

How Many Lindy Hoppers are There

June 22, 2014 lindypenguin 16 comments
I’ve been wondering about this question for a while but with a little free time I finally got around to having a decent crack at working it out with some GIS and statistics.The short answer: by my estimation about 120,000. Read on for the longer answer.

Where are people Lindy Hopping?

This is actually a somewhat difficult question. Scenes are constantly starting and folding – such as scenes in college towns in the US and those where expats are the primary drivers and consumers.* Plus the advent of the travelling lindy hopper has led to many camps being held in places that don’t have a regular scene. For this purpose a “scene” is a location that actually has some form of regular Lindy hop be that classes, social dancing or some other organising activity.

My starting point was the World Lindy Hop Map which I supplemented with maps for countries and smaller scenes including the LA Lindy Hop Map, The Lindy Hop Map Australia, Lindy Hop and Swing Dance in Italy, and the UK Lindy Map.

Next was quality control.

I ended up removing a whole bunch of points. There were plenty with incorrect geocoding (e.g. suburbs of cities that were coded to small towns, country entries sitting in the middle of nowhere etc.), I also did a fair bit of checking to ensure currency of schools, events, etc.** Finally I did a bunch of research to add new venues, website links and cover as broad a geography as possible.

The final result was 827 organisations, dance schools or other evidence of regular lindy hop activity in a particular location. I’m sure I’ve missed plenty of organisations in local areas – but my mission was to see if a location had lindy hop, not how many dance schools/societies were there.

As I don’t plan on keeping this updated I’m not going to put it on google maps. However here is the data in kmz and shapefile format for those who wish to use the data in your own projects and maps. I’ve made my best effort with this data, but it’s necessarily incomplete and the locations are rather approximate – don’t use this for driving directions or holiday planning without further research!

How many Lindy Hop scenes are there?

Obviously, these locations aren’t all individual scenes. Recognising that some scenes are supported by 1 large organisation and others by many smaller ones I wanted to get at the number of geographically independent scenes.

First I gathered venues to the nearest urban locality (using data from Geonames) – all those that were within about 15-20km I considered to be part of that locality. I merged a number of these together where the localities were separated by less than 30km – considering that this is probably the maximum distance (as the crow flies) for there to be enough mixing amongst venues for them to be

The answer – 463 scenes spread across 58 countries (or 59 depending on how you count Taiwan) and a range of self governing territories (e.g. New Caledonia, Hong Kong and the Åland Islands).

From this we can see that Lindy Hop is an activity for the relatively wealthy in the world – here is a chart of lindy hop prescene graphed against the Human Development Index***: 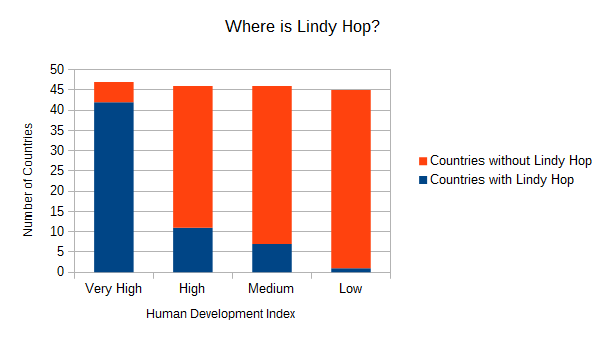 How many lindy hoppers are there?

Given the data I’ve generated here’s a related question: How many people could lindy hop if they wanted to? To assess geographic access (leaving aside demographic and cultural factors that affect access) to the above listed venues I applied the World Population Layer to determine the number of people living within 15km of a lindy hop venue. The result: about 308 million people.

Now onto the number of lindy hoppers. Rather than try and guess the average scene size (which can be tricky) I’ve applied some fancier statistics and a Monte Carlo simulation to get a bounded guess. There’s a more complete explanation and the code I used in a short R script I wrote here.

The assumptions I made are:

So now it’s over to you. Can anyone else come up with a better answer?

**It doesn’t help that there are literally hundreds of dance schools and other organisations out there whose websites seem to have been created back when geocities was popular and left unchanged (except for content updates). Seriously people, if wordpress is too hard for you spend the money on a web designer.