Disclaimer: Glenn Crytzer asked me to do this review and would have given me a copy of the album for it, had I not already been on the kickstarter. 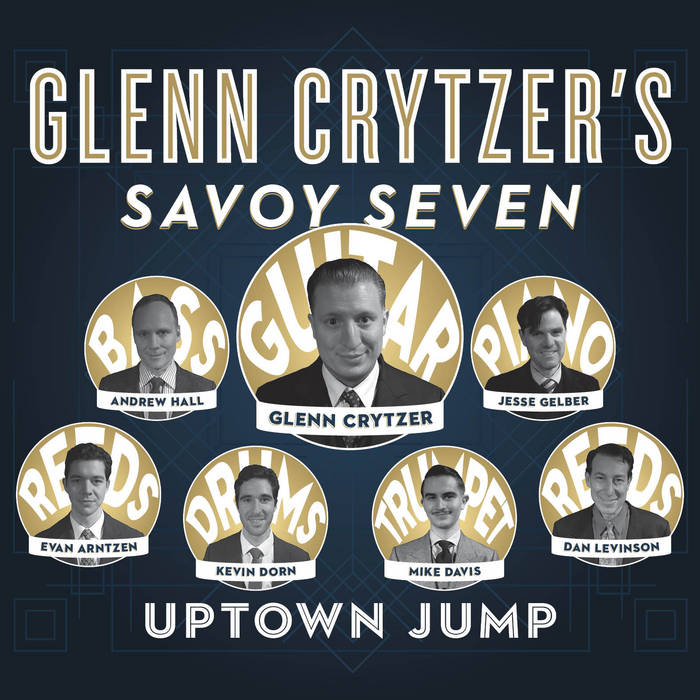 Buy it on Bandcamp and CD Baby. You can also support Glenn on Patreon.

Uptown Jump is composer, guitarist and bandleader Glenn Crytzer’s sixth release and I believe the first since his move to New York City. He has brought together a stellar line up of musicians in the Savoy Seven, his newest group, including Mike Davis on Trumpet (a regular at Mona’s who also plays with Baby Soda and Gordon Webster) Evan Arntzen on reeds (also with Baby Soda, plus Naomi Uyama’s Handsome Devils), Dan Levinson on reeds (a member of Vince Giordano’s Nighthawks and one of the most “in-demand reedmen” around), Jesse Gelber on piano (bandleader of the Swing Doctors), Andew Hall on Bass (who plays with Tamar Korn, and Gordon Au’s Grand Street Stompers) and Kevin Dorn on drums (also plays with Baby Soda and Gordon Au).

This is a full length album of entirely original music (though you can get a version of Tuxedo Junction with Shim Sham breaks on the bonus tracks) and with this release Glenn’s writing has clearly further matured. All of these tracks sound like they could have been dug up from the vaults of Colombia or Vocalion or from sheet music found in someone’s attic. Although Crytzer is far from the only contemporary swing musician who is writing and arranging new tunes, his intensity of activity sets him apart from everyone else. As a DJ and a dancer new music is incredibly important in keeping the lindy hop scene growing and creative, especially as old unheard of gems are becoming increasingly difficult to find.

It’s on the instrumental compositions such as Uptown Jump, Hop on the Mop and The Lenox that Glenn’s composing hand really shines. The band is tight and each of the musicians’ solos inspired. I’m not the biggest fan of Glenn’s vocals and the heavy double entendre is kind of getting a little old, but that’s mostly a matter of personal preference. I would play any track on this album for dancers, even with the tempos topping out at a blistering 316 beats per minute yet there are plenty of tracks that are right in the pocket for some great lindyhopping.

If you’re used to listening to contemporary swing bands (where musicians are individually miced) the audio quality may be disappointing. Crytzer makes a number of choices in his recording methods that hark back to the way swing music was originally recorded, which he goes into in a blog post here. This has the effect of making the recording sound less ‘crisp’ (but in my opinion much warmer) than some other contemporary recordings and it may not perform as well as other contemporary music on some of the shitty audio equipment many of us Swing DJs are forced to use. But on decent equipment this album will kick ass!

Buy this CD – you won’t regret it.